The Mound Westonka football season ended abruptly last Saturday afternoon at Haddorff Field when the Zimmerman Thunder beat the White Hawks 42-14 in a Section 6AAAA Semifinal playoff contest. For the second consecutive season, the White Hawks took an 8-0 record into the Section 6AAAA Semifinal game, yet came up short of their season’s goal. “ It definitely wasn’t what we expected, but hats off to Zimmerman. They played very well. The ten days off probably hurt us to some extent as we came out flat. We just didn’t come out with the enthusiasm and energy from the start like we are accustomed to.”

Zimmerman opened the scoring early in the first quarter, on a 3rd and 11, when quarterback Brock Snow found standout senior Caden Spence on a corner route. Spence took it 41 yards for the touchdown and a 7-0 lead with 9:17 left to play. Westonka senior running back Tyler Albert started the next White Hawks possession with a hard fought 10-yard run. Albert carried three more times netting 10 yards. Then, junior quarterback Carter Reinbold hooked up with his favorite target, Kade Tappen, on a 24-yard pass play before Reinbold kept it himself on a run up the middle where he fumbled the ball. However, senior offensive lineman Sam Dioszeghy fell on the ball keeping the drive alive. Reinbold then hit Tappen once again and the senior wide receiver scored from 25 yards out. Senior Ben Neve nailed the extra point to knot the score at 7-7 with 6:13 to play in the first quarter. “We felt like we had finally got into a rhythm on offense and settled in after that offensive drive, but still knew it was going to be a dogfight all game long.”

Senior DL Matt Oko’s quarterback sack, resulting in a seven-yard loss, forced the Thunder to punt the next time they had the ball. Both teams then traded a few punts before Zimmerman got good field position at their own 42-yard line. Eight plays later Spence hit paydirt again on a 2-yard touchdown run, retaking the lead 14-7 with 9:22 left in the second quarter. Following the Zimmerman kickoff, Albert took a handoff and was stood up at Westonka’s own 26-yard line. While fighting for extra yardage the ball came out and Zimmerman recovered. Three plays later Spence scampered around the right side for a 23-yard score extending the lead to 21-7 with 8:19 to play in the first half. “Unfortunately, we played on a short field defensively almost the entire first half, especially when we were playing into the wind. Cade (Spence) is very explosive and is a very talented player. I felt like we lost some confidence because our defense was on the field for a long time, and had their backs against the wall most of the first half.”

Kicking into the wind, Zimmerman’s kickoff specialist hit a low, side spinning kick that hit the leg of a Westonka player just beyond the 10-yard restraining line. The ball caromed back towards Zimmerman where a Thunder player recovered the deflection. Zimmerman drove 33 yards inside White Hawks territory. On second-and-five, Snow was pressured on a pass play and threw a backwards pass towards the Westonka sideline. Sophomore, Ray Beiningen, who led the White Hawks with 12 solo tackles (13 total), pounced on the Thunder fumble giving Westonka an opportunity with 6:06 left in the first half. After Albert picked up a first down on the first play, the Zimmerman defensive front, who held the vaunted Westonka rushing attack in check all game, forced another punt. “Ray had a huge day for us, he was all over the field and made some big plays to keep us in the game. Inopportunely, we weren’t able to capitalize on those plays once the offense got the ball.”

The difference in the first half was the ball-controlling rushing attack of Zimmerman. They ran 39 plays (36 carries) gaining 179 yards on the ground. Meanwhile, the White Hawks were more balanced in their 21 plays (14 rushing, 7 passing), but it resulted in only 39 rushing yards and the two completed passes of 49 yards. The White Hawks defense stepped up at the start of the third quarter stopping the Thunder on a fourth down play at the Mound-Westonka 29-yard line. Senior Will Wallace delivered the big hit that held Zimmerman just inches short. “It was really fun to see the boys staying in the fight and battling it out throughout the game. Will was a great leader in this game, like he has been all season, and played his heart out, leaving it all on the field.”

The White Hawks offense, which came into the game averaging over 300 yards rushing, went three-and-out on their opening possession of the second half. It took all of two plays for Spence to find the end zone once again. He took a pitch to the right and tight-roped the sideline for a 59-yard TD run and a 28-7 advantage with just over seven minutes to play in the third quarter. Albert (20 carries, 63 yards) finally saw some daylight and picked up two first downs, which helped Westonka move inside Zimmerman territory. But, the Thunder defense held once again stopping Reinbold short of a first down on 4th and 5. Zimmerman took over on downs and proceeded to score on the first play from scrimmage. Matt Freeberg (9 carries, 114 yards) took the inside handoff and rambled 62 yards for the touchdown. The missed extra point made it a 34-7 lead with 2:44 remaining in the quarter.

The next few Westonka possessions were much of the same as the Thunder defense held the White Hawks to just 17 rushing yards the rest of the game. Spence ran it in from 1-yard early in the fourth quarter, his fourth rushing TD of the game, and his fifth on the day giving Zimmerman a commanding 42-7 lead. He finished with 170 yards rushing on 22 carries. Westonka’s senior WR Jack Danielson scored on a 40-yard pass from Reinbold (10-17-180 yards, 2TD’s) to close out the scoring with 9:23 to play. “It was awesome to see a senior like Jack make some big plays in his very last game.”

Defensively, Oko (7 tackles) recorded his seventh sack and forced a fumble for the fourth time this season, both are team-high’s for the season. Junior Jaaron Konkel tallied 13 tackles (9 solo), while Wallace totaled 8 tackles (7 solo). Senior Cam Peterson had six tackles and Dioszeghy had five. “These guys have made plays all year, and continued to make plays today even when it got tough.”

Westonka finishes the season 8-1 after capturing their second straight Twin City Maroon Subdistrict title. Reinbold led a potent offense all season, rushing for 652 yards and throwing for over 1,200 yards and 19 TD’s with just two interceptions. Albert became a 1,000-yard rusher for the season and finished with 15 touchdowns on the ground. Tappen caught 30 balls for 466 yards while hauling in eight touchdowns. All-purpose senior Fletcher Anderson added 171 receiving yards, while sophomore Max Kraay was second on the team with 13 receptions. The defense was led by Konkel’s 50 tackles and Oko’s eight tackles-for-loss. Sophomore Aaron Kroese finished with four interceptions and nine defended passes to lead the team. Neve was nearly perfect this season kicking 52 extra points which was the most in all of Minnesota. “We are really proud of the seniors. They had a phenomenal season and were great leaders doing everything we asked of them. We are excited to get back to work this off-season as we have several key returners that will be leading us next season.” 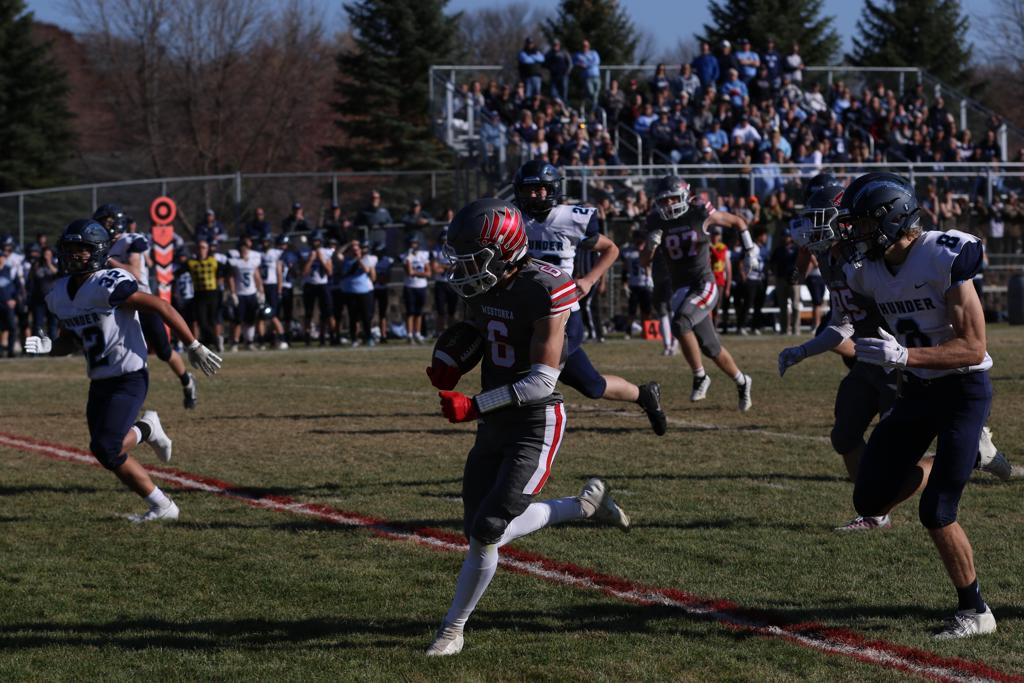 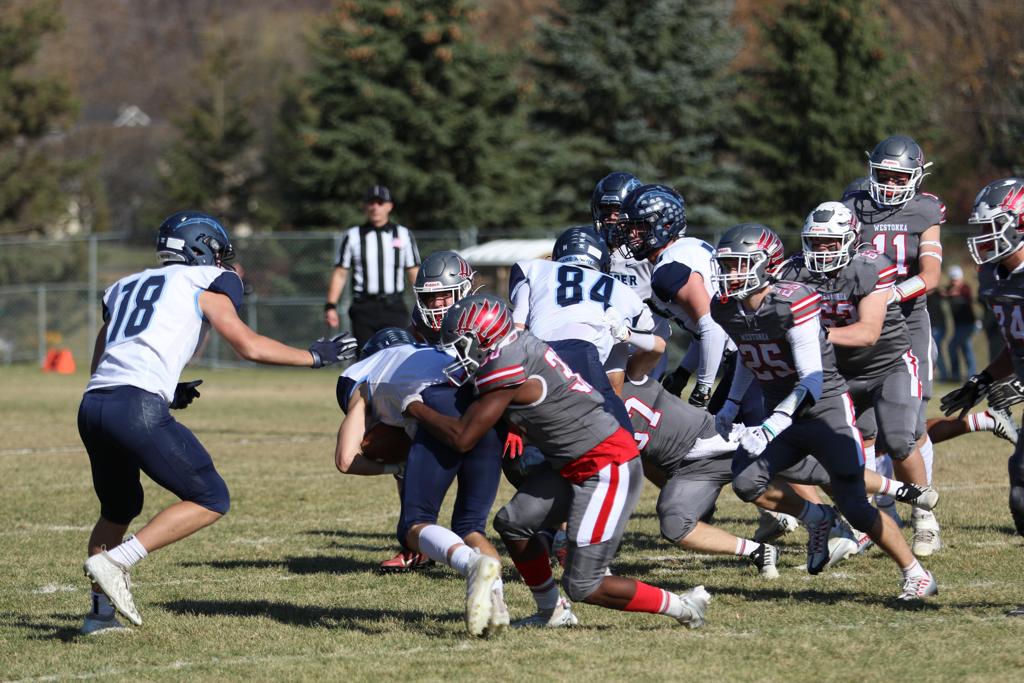 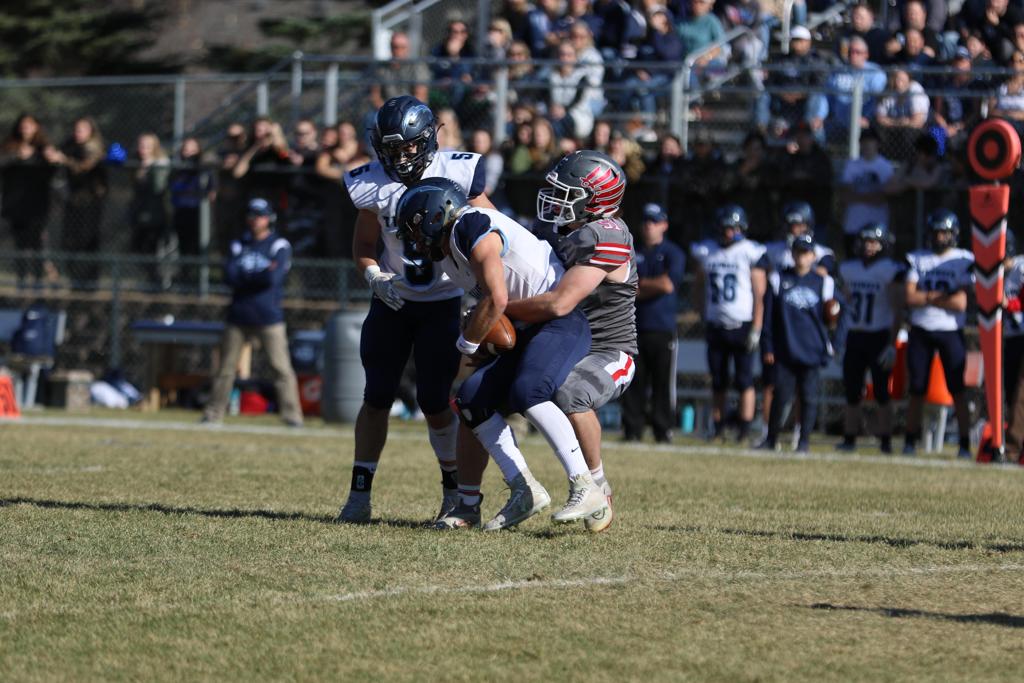