The Mound Westonka White Hawks entered their game against St.Paul Highland Park in unfamiliar territory. Coming in with a perfect 5-0 record and ranked second in the state is not a place Westonka has been before. How would the White Hawks respond against the 2-3 Scots? It didn’t take long to find out.

As has been the White Hawks’ strength all year, the defense would again be the story. The Scots would receive and the defense would make it a very short 4 and out drive. Triple C, Cris Christensen, would have triple rushes in this very first drive and would get the White Hawks into the redzone. Tyler Von Bank would finish the drive with Ben Neve’s extra point making it 7-0.

A new set of downs for the Scots but it would be the same story. Defense holds again and forces a punt. This time Cris Christensen wouldn’t need three tries, completing a monster 66 yard rush to the endzone. Neve would make it 14-0 with a little over a half of the first quarter to play.

The Highland Park third drive did not prove to be the charm either, with the White Hawks defense again holding and forcing a third punt in the game. However when the Hawks took over, the Scots did finally catch a break as they recovered a fumble near mid-field. That luck ran out against the strong Hawks Defense as yet again they forced a punt.

Ben Tice, Tyler Albert, and Fletcher Anderson all carried the ball and the White Hawks started to march down field again. Then with a little over a minute to play the Scots would string together their two biggest plays of the game with an interception followed by a long 59 yard reception by the Scots to bring them within two yards of the endzone. This time they would find the endzone making it 14-7 with 50 seconds to go in the first quarter.

The quick change in momentum wouldn’t last long. Carter Reinbold would have a huge kick off return to the 45 and then Christensen would move the chains as well. With 10:35 left, Jake Gaylord would take a chance in the endzone finding Jake Dallman from 49 yards away. The extra point snap was bobbled making the score 20-7.

Even though the clock may have been winding down for the first half, the offense and defense were still gearing up. Another defensive stop, followed by an offensive score by Christensen and Neve would make it 27-7. Soon after, the defense would again hold and Gaylord would find Will Wallace for a 31 yard touchdown to make it 33-7. Ben Tice would intercept the ball as time expired in the half.

While the lead was strong, one would never know by the huddle. This is a team that is always trying to learn from mistakes. Player leaders were reminding each other that this game was not done and they had some things they could do better. The defense clearly listened and would not allow another point the rest of the game.

The second half the defense would continue to shut down the ground and the air game of the Scots and would force punt after punt. The offense was not done though and sophomore Carter Reinbold would step in at quarterback. This quarter Cam Peterson would have his turn rushing into the endzone and with Payton Kasper’s extra point, the Hawks would make the score 40-7.

The White Hawks would finish the game with fresh legs and fresh faces in new positions. Adam Mack would move from the defensive side of the ball to running back and would rush for 34 yards. Freshman Ray Beiningen would rush for 48 yards. And, while he didn’t find the endzone this game, Tyler Albert still was a force on offense, rushing for 70 yards which put him over 500 rushing yards on the season thus far.

On the defensive side, leading the team in tackles were Adam Mack (7), Joe Zachow and Tyler Von Bank (6), Jack Pfeiffer and Matt Oko each with 4. The defense also combined for 13 tackles for loss in the game making the Scot’s net rushing yards a -41 for the game. Also of note on the defensive side is that the Scots converted only one 4th down in the game and 0 of 14 3rd down attempts.

The Offensive Line was also the big story of the game, creating space for Cris Christensen to gain 204 yards. Andrey Sivtsov was named the Defensive player of the game boasting 2 solo tackles, 1 assisted tackle and a sack. Defensive coordinator Kyle Ague said, “It was fun to watch the guys fly around on the field. They did a great job of preparing all week long and were really confident going into the game and it showed up in the way they played.” Coach Ibs added, “I get really excited about a dominating performance, but as defensive coaches, you are always a little twisted and frustrated anytime anybody scores and you want to get that fixed right away. Our defense has been very good this year because first and foremost we have really good players. Kids that fly around the field and make plays for our team. Second, kids on our team have also learned to be unselfish. They are willing to eat a block or stay in a gap so that another person on the defense can make the play. It is what makes a good defense a great defense.”

The big win improves the White Hawk’s season record to 6-0. The White Hawks will finally be playing at home again for their final two regular season games after playing three straight games on the road. 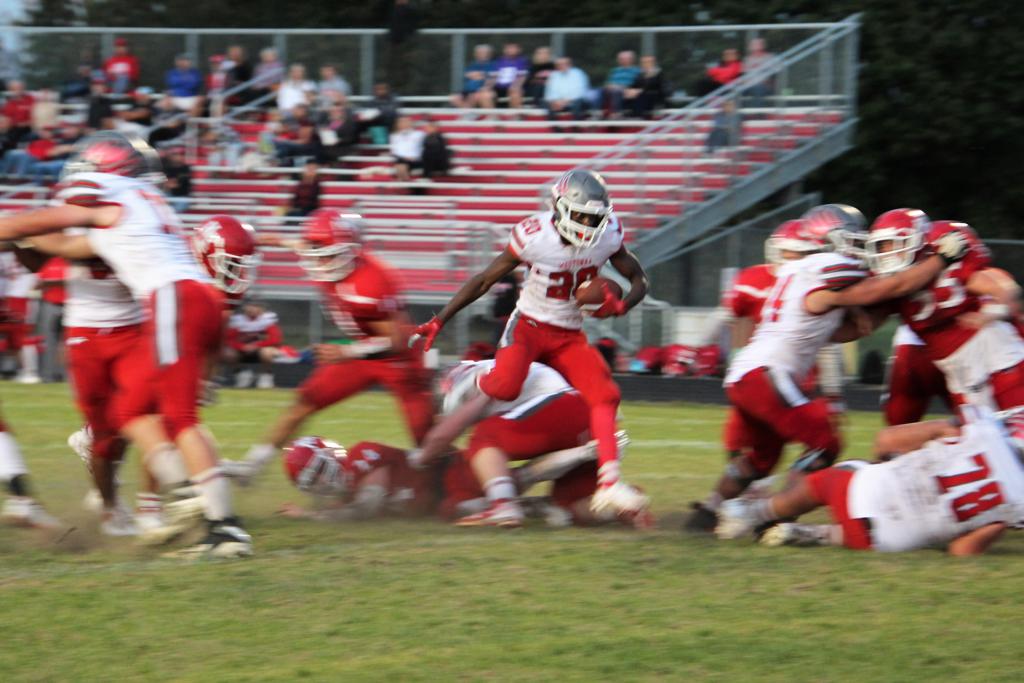 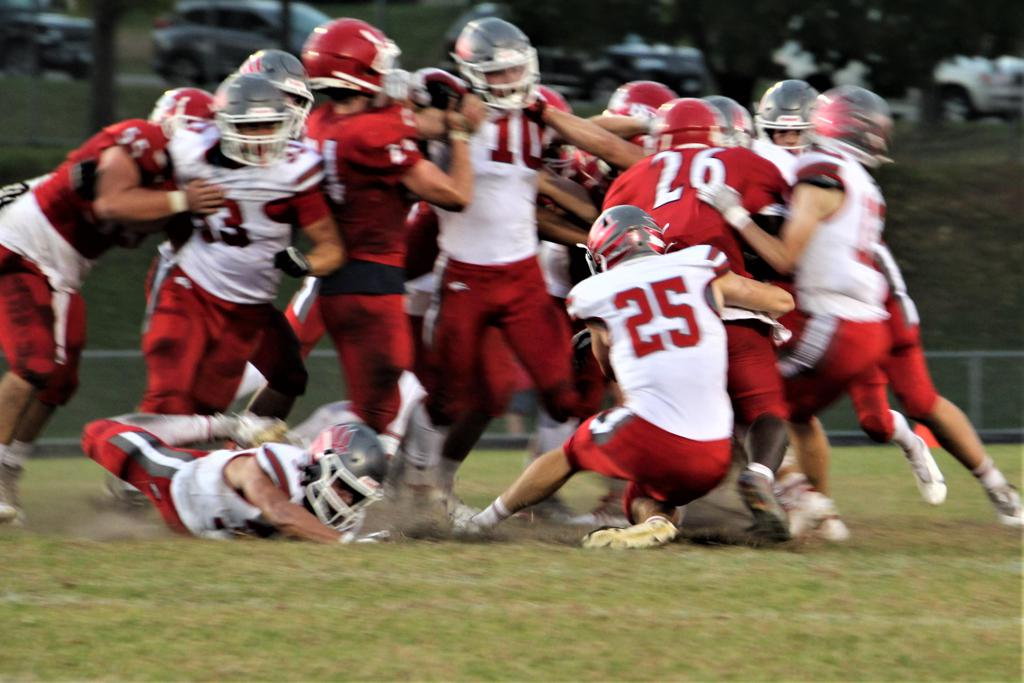 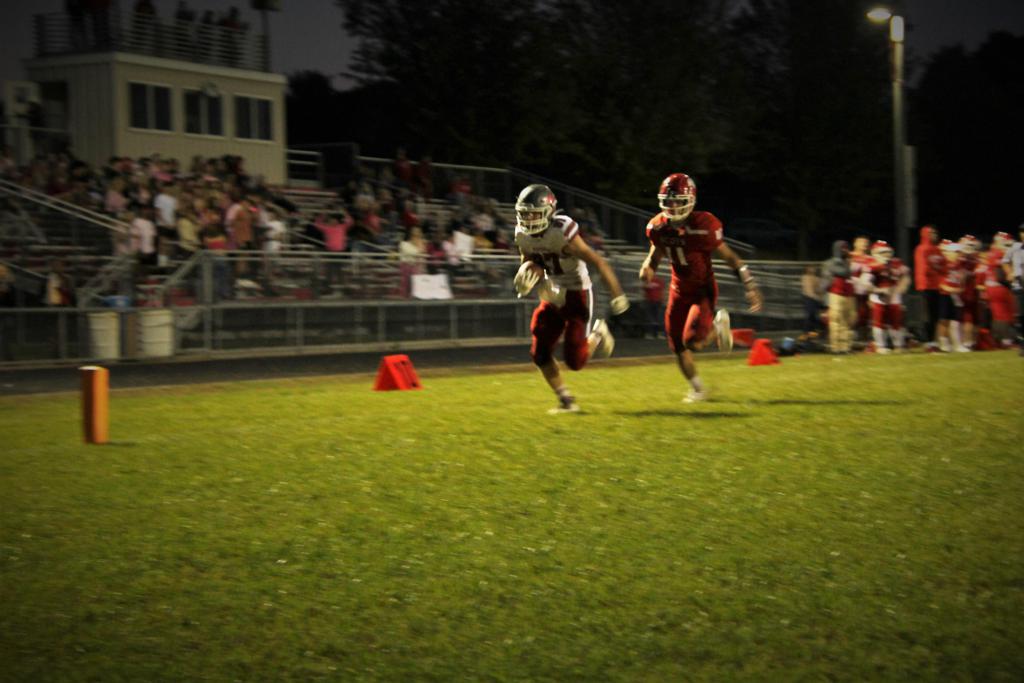