The White Hawks traveled to Nicollet Island to take on the DelaSalle Islanders on Friday September 24th at 6pm. It was a picture-perfect fall afternoon and although the Hawks didn’t play picture-perfect football, they would finish the game with their perfect record still intact.

The White Hawks would start this game like others, with great field position thanks to the play of special teams. Junior Tyler Albert would return the kick off to the 50 to start. He and Tyler Von Bank would string together enough to earn a first down and on the second set of downs, Cam Peterson would drag half of the Islander Defense with him to earn another first. Tyler Von Bank would take it from there making the score 7-0 with the extra point from Neve. Their first drive would eat up over 7 minutes off the clock.

Again special teams would dominate and push the Islanders all the way back to their 10 on the kick off. The White Hawks’ defense would give up little and DeLaSalle would be forced to punt. That special teams defense worked their magic yet again, getting a hand on the punt which allowed the White Hawks to take over at mid-field once again. Tyler Albert, coming off a key block by Fletcher Anderson would run it all the way back to the 9. Tyler Von Bank would once again finish the drive making the score 13-0.

The Islanders would receive and once again could not move the ball against the tough White Hawks Defense. A monster sack by Fletcher Anderson would force another punt with the Hawks taking over at mid-field. This time the White Hawks would struggle to handle the ball and in a rare fumble, the Islanders recovered the ball and found themselves in their best field position on the 28. With time winding down in the first quarter, the Islanders QB found a man in the endzone and would make the score 13-6 as the quarter ended.

The White Hawks used more caution in their first drive of the 2nd quarter and methodically worked their way down the field to find Wil Wallace in the endzone making it 20-7 with Neve’s extra point. With 8 minutes left in the quarter the Islanders would get the ball back but again could not sustain a drive. Their 4th down punt would be returned by senior Ben Tice to the 40. This great run was called back 15 due to a rare White Hawks penalty but still left them at the 41. As they worked their way back down the field, Gaylord took a chance in the end zone but the pass was intercepted by the Islander Defense and they ran it back to the 20. What could have been a momentum changer though, was quickly squelched by the tough White Hawk Defense. The White Hawks Defense looked more like offense as they moved the ball in their favor back toward the end zone. They sacked the QB twice, pushing the ball back to the 1 yard line. When the Islander Quarterback scrambled into the end zone to get free, he was attacked by a flock of Hawks who would force a fumble and Matt Oko would recover the fumble in the endzone making the score 27-6 with just 1:30 left in the half. Most would expect the half to end that way, but the Hawks had defensive momentum and all their time outs to use, and they took full advantage. The defense would again hold the Islanders and a huge punt return by Ben Tice would give the White Hawks one more chance with 44 seconds on the clock. A quick pass to Fletcher Anderson and the extra point would end the half 34-6.

The story of the second half was much the same. The Islanders first drive took over 7 minutes off the clock but ended in nothing. The White Hawks would take over and string together a drive that would be topped off by Cris Christensen finding his way to the end zone, extending the lead to 41-6. The Islanders again would be stopped in their offensive drive by the tough White Hawks defense and they would take over on downs. This time the Hawks would settle for a Field Goal by Ben Neve making it 44-6 to play in the quarter. Another strong defensive stand would give the ball back to the Hawks and Carter Reinbold would take over as QB. This time the Islanders would force the Hawks to punt to end the quarter. The White Hawks used the lead as a time to switch up some of their personnel and positions and the Islanders took advantage, scoring to make it 44-12 with ten minutes left to play. The Islanders then tried to switch it up too, attempting an on-side kick but it was quickly covered up by Isaac Paul and the Hawks would take over mid-field. Aaron Kroese and Jacob Hansberger strung together a series of rushes that ended when Jacob Hansberger found the end zone with 2:50 left. The extra point by Kasper made it 51-12. The Islanders did have one more trick up their sleeve however, and as the final seconds ticked away, a Hail Mary pass downfield as time expired would end the game 51-18.

Defense depth was the story of this game with 6 sacks between Von Bank(3), Adam Mack(2) and Fletcher Anderson(1). Von Bank and Mack would also each contribute 5 tackles followed by 4 from Joe Zachow and 3 from Tristan Oates, Ben Tice, Fletcher Anderson, Matt Oko, Andrey Sivtsov and Tyler Marshall.

Tyler Albert led the team with 137 rushing yards, followed by Cris Christensen and Jacob Hansberger. The offense led by Jake Gaylord combined for over 365 total yards as compared to 160 by the Islanders.

Senior Captain Joe Zachow said about the win, “We started off a bit slow but Defense and Special Teams came up with some monster plays when we needed them to. Our offense kept driving all game. It was a great team effort.” 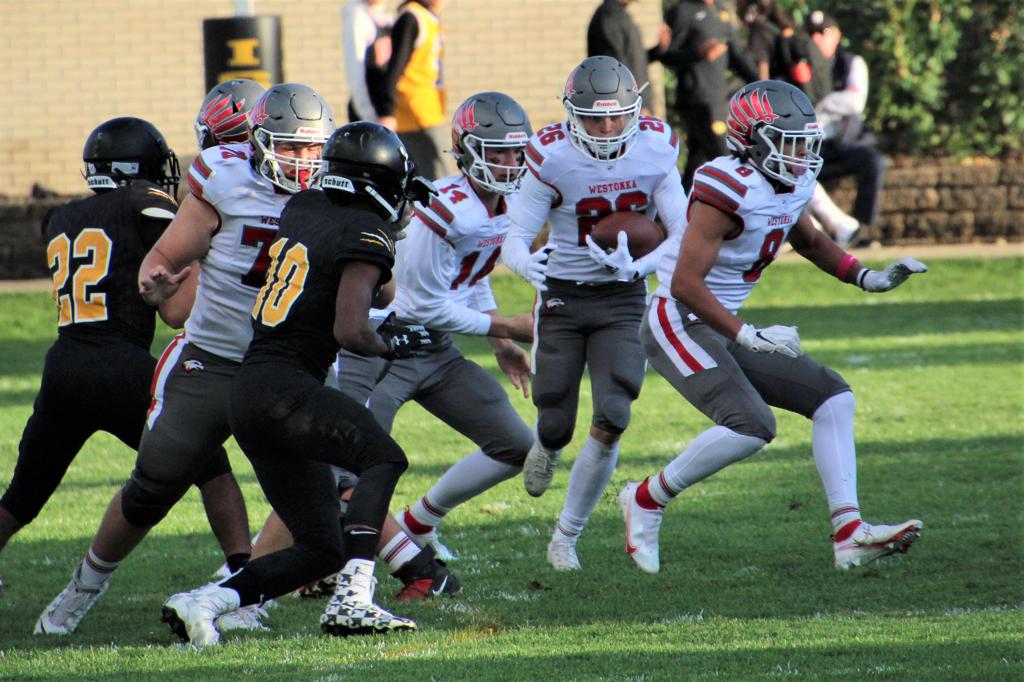 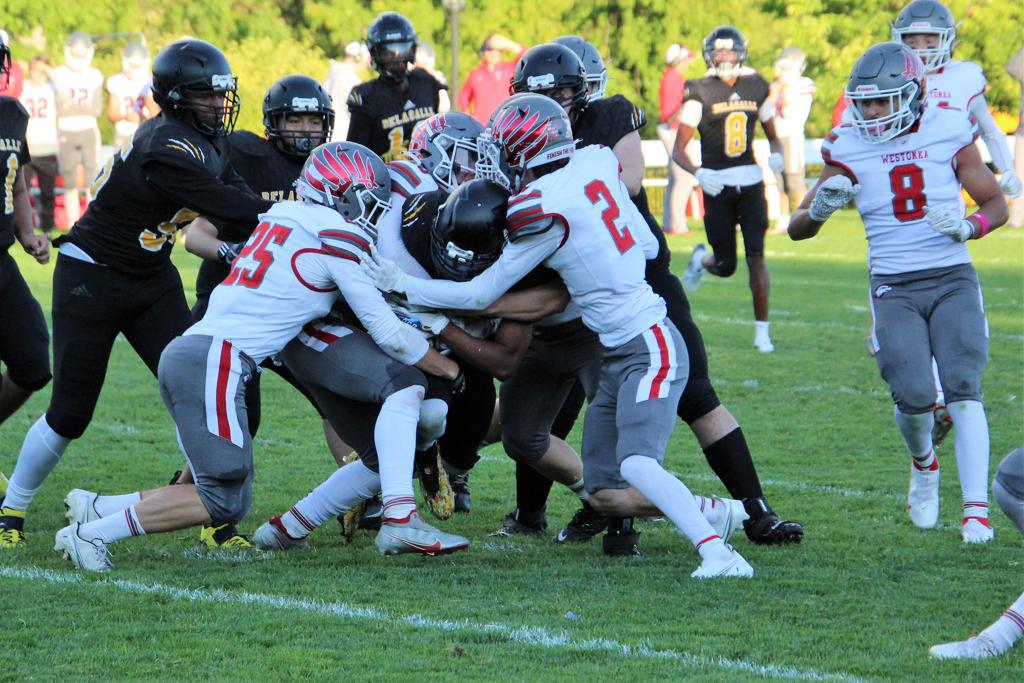 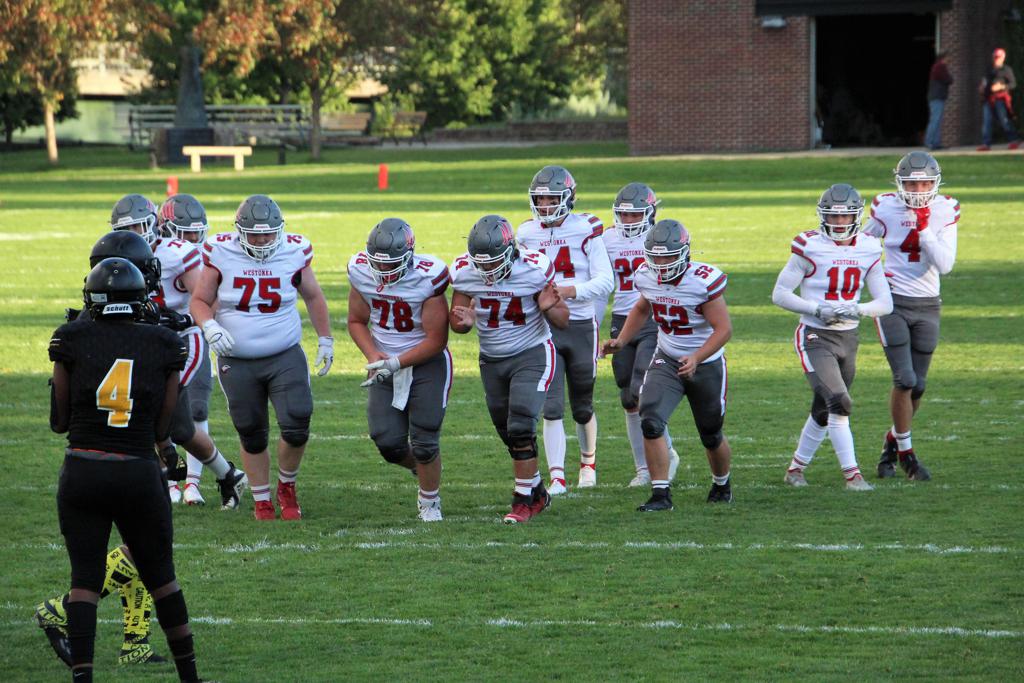