The White Hawks entered Homecoming week with lots of wind beneath their wings having outscored their last two opponents 89-14. They knew, however, the Park Center Pirates would be a different story. This talented 5A team, about three times the size of Mound Westonka, was entering the third week undefeated as well. The game was worth the price of admission with 60 hard-fought minutes by both teams. The bleachers were filled with the Homecoming crowd and they would stay that way through the very last play of the game. Every second would be needed to determine this game’s victor.

The White Hawks would receive to start the game and despite a strong run by Tyler Albert to get the Hawks to midfield, the White Hawks would need to punt on their first drive. The Pirates would face the same struggle and despite earning a fresh set of downs with their running game, they too had to punt. This time the momentum would change as Tyler Von Bank blocked the punt, scooped it up, and scrambled into the endzone. Neve’s extra point would give the White Hawks a 7-0 at the midpoint of the first quarter.

The Pirates would take over on the 20 and thanks to a few holding penalties along with a giant sack by Matt Oko, they found themselves moving the wrong way down the field and were forced to punt again. Cris Christensen would return that punt to midfield. Soon Cam Peterson stepped up and dragged a few defenders with him who were finally able to stop him just short of the goal. Von Bank finished the drive making it 14-0 with Neve’s help.

Once again, the Pirates struggled to move the ball and were forced to punt. Ben Tice would receive and coming off a huge defensive play, the adrenaline was pumping. He shimmied and shaked and returned to the 37. Despite a hold called on the White Hawks, Fletcher Anderson soon recovered those yards on a reception.  The running game continued to move the ball but soon the Hawks found themselves in no-mans-land on 4th down. Too far to kick a field goal, too short to punt, Jake Gaylord would find the Homecoming King, Jake Dallman reigning over the endzone. He showed his ‘royal highness’ by grabbing the pass out of midair to  make the score 21-0 with Neve’s extra point.

The Pirates would get another chance with the ball but a head’s up interception by Jack Pfeiffer would give the ball back quickly to Westonka. The White Hawks couldn’t capitalize this time and an unfortunate botched snap on the field goal attempt would turn the ball over to the Pirates with just over 6 minutes left to play in the half.

The Pirates would move the ball slow and steady down the field this time, eating up the remainder of the minutes in the half. In the chaotic final play of the half, disputed by the White Hawks to be an extra 5th down, the Pirates would find a man in the endzone and as time expired both teams would head into the half, with the Hawks leading 21-7.

The Pirates would receive in the second half and  started with great field position at the 40. They returned to what worked in their final drive of the first half by running the ball repeatedly. They would eat 6 minutes off the clock and score on their first drive making it 21-14.

The first two series by both teams would be quick with no additional points to show for it. When the White Hawks would get the ball back with about 10 minutes left, they knew they needed to get on the board. This new situation called for some new tricks and Jake Gaylord delivered. He would keep the ball a few times on this drive and finally scrambled to get the ball to the two yard line. Von Bank would take the next ball and refuse to be taken down. His touchdown would make the score 27-21. A rare miscue by the extra teams on the snap would leave the score at 27-21. The Pirates would get another chance with 7 minutes left in the quarter but the Westonka Defense would come up big, forcing the Pirates to punt. With just a little over 5 minutes left, the White Hawks had their chance to solidify the victory. Christensen and Von Bank would keep the ball on the ground as the White Hawks tried to gobble up more time on the clock. With just over two minutes to go, and just as it started to look like Westonka would make the lead insurmountable, the Pirates defense would force a fumble, giving them the ball back one last time. The White Hawks Defense would find themselves in the most important series and the biggest test of their season so far. Great coverage on receivers left nowhere for the Pirates to throw. The defensive line would rush and pressure and give the QB and backs no place to go. Final sacks by both Adam Mack and Max Swanson would end the series and the game with the White Hawks soaring to victory. This was a Homecoming win for the ages.

Special Teams continued to be a major factor in the White Hawk’s success with Albert, Tice and Christensen averaging 20 yards on punt and kick-off returns. Tyler Albert led the White Hawks with 74 rushing yards followed by Christensen and Von Bank. Jake Gaylord found Dallman, Cam Peterson, and Fletcher Anderson in the air who contributed 78 receiving yards.

On Defense, Tyler Von Bank had a monster game with 10 tackles, followed by Fletcher Anderson and Adam Mack each with 7. Joe Zachow, Cam Peterson, Cris Christensen, and Jack Pfeiffer each had four or more tackles. Matt Oko, Adam Mack, and Max Swanson each had game-changing quarterback sacks right when the White Hawks needed it the most. And, while the Pirates led the White Hawks in almost all statistical categories, points scored was in the White Hawks favor, extending their undefeated season record to 3-0.

Following the game Coach David said, “though we left a lot of plays out on the field, we were really happy with the way our boys responded when their backs were against the wall. Park Center really had all of the momentum from the end of the 2nd quarter through most of the 4th quarter and our boys just kept battling. That is a testament to their resiliency. Our theme for this year is Finish the Fight, and the boys definitely did that tonight.” 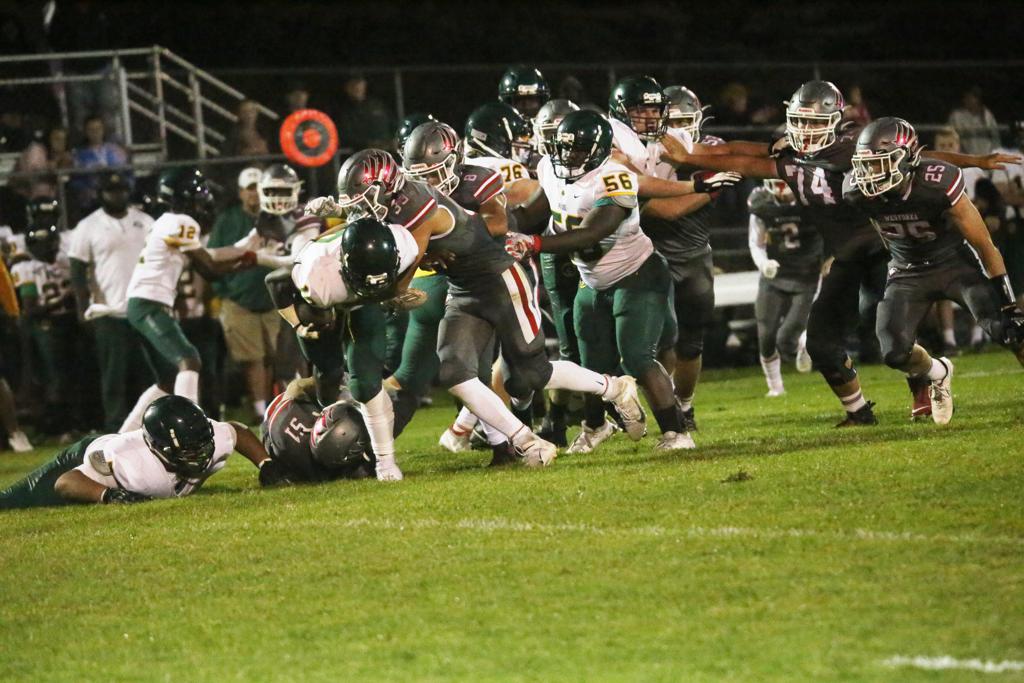 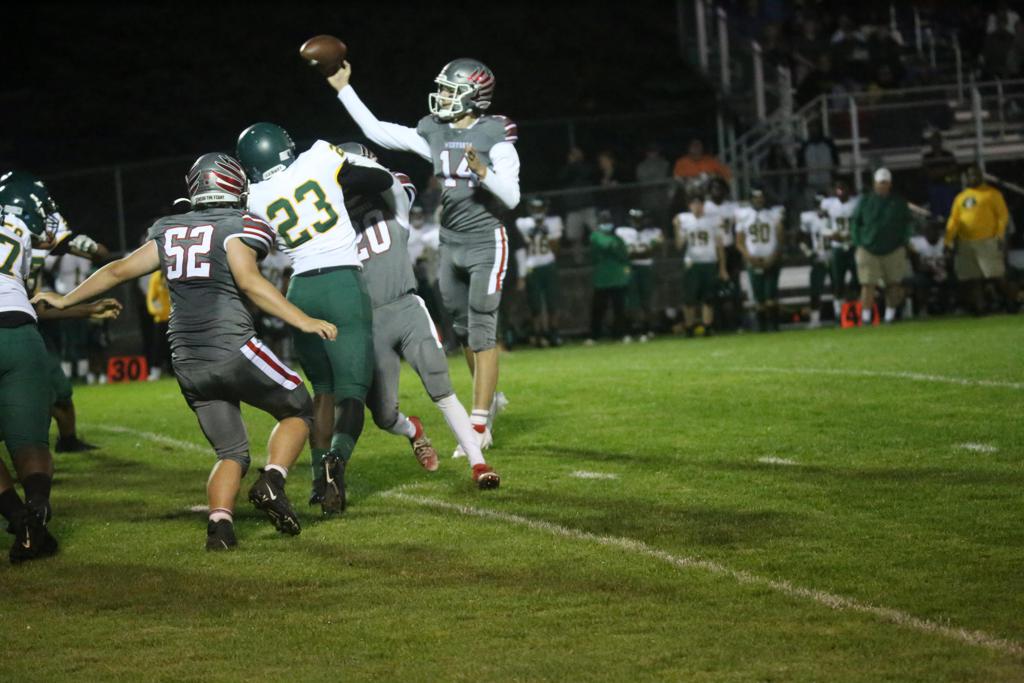 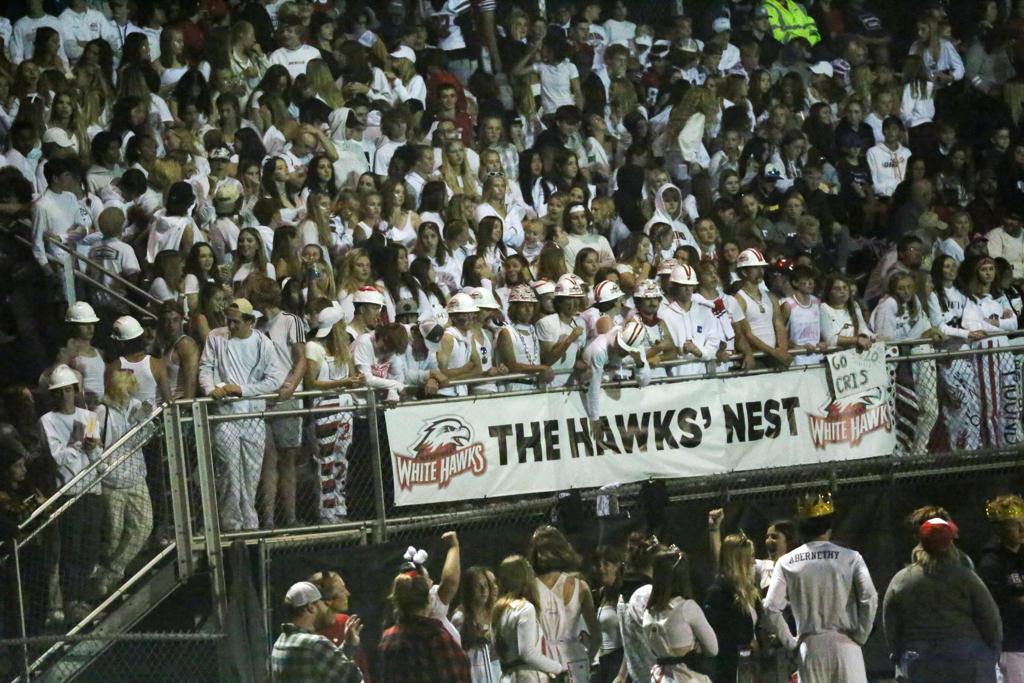