All Bark and No Bite. The White Hawks Soar Over the Huskies 47-0

It was a picture perfect return to Friday Night Lights at Mound Westonka High School when the White Hawks hosted the St. Anthony Village Huskies. As it turns out, the Westonka fans were as excited to return to Friday night lights as were the players. The home section was packed with red, white, gray and black and much like the stands, it was all White Hawks from the very first kick off.

The White Hawks would take the opening kick off and it didn’t take long for “the Tyler’s” to do their thing. Tyler Albert was given the first few snaps and earned a fresh set of downs. Senior quarterback Jake Gaylord then found Tyler Von Bank for whose strong run after reception earned the White Hawks a first and goal. Tyler Von Bank then took over as QB and took the snap into the endzone putting the White Hawks ahead 6-0 on their very first drive.

White Hawks kicked off and the Huskies had nowhere to run as Jacob Peterson wrapped up their returner right away at the 27 yard line to start. This is where the White Hawk Defense stepped up and would give up nothing.  Forced to punt deep in their territory, the White Hawks took advantage and blocked a bobbled snap. When the White Hawks took over this time, they were already within 10 of the endzone and seconds later Tyler Von Bank’s keeper and 2 point conversion gave the White Hawks a 14 point lead with 6:24 left in the first quarter.

This time the Huskies would scratch out their first fresh set of first downs in the game. The little bit of  momentum was quickly squelched by the White Hawks as Joe Zachow forced a fumble and recovered it at the 25 yard line. Jake Gaylord started this set of downs by frustrating the defense, drawing two off-sides penalties in a row. With a free first down the drive continued until Cris Christensen zigged and zagged for a touchdown making the score 20-0 with 1:53 left in the quarter.

After a solid return and a face mask penalty by the White Hawks, the Huskies finally started with good field position. The defense would deny them again and they couldn’t earn a fresh set. Going for it on 4th and 6, Tyler Von Bank and Joe Zachow knocked the ball out of the hands of the Husky receiver and the White Hawks took over on downs. Quarter one would end 20-0.

Second quarter the White Hawks would sink their talons into the Huskies and not let go. Tyler Albert started with a strong run to get the Hawks to midfield. After a few good stops by St. Anthony, Westonka found themselves at 4th and 16 to go and Jake Dallman would catch and run for a first down, dragging his defender with him for about 5 yards. After an injury timeout, and a few rare penalties, it appeared that the White Hawks  would need a jump start to get moving the ball again. Von Bank provided the jolt earning a fresh four and Tyler Albert finished the drive adding six more to the score. The Neve point after made it 27-0 with 7 minutes left in the half. When the Huskies received the ball this time, they shifted to their passing game to try to get on the board. The air is where the Hawks live and they were repeatedly struck down in their passing attempts, forcing a punt. The White Hawks took full advantage of their placement and after a successful and quick drive, Cam Peterson got the Hawks to the one yard line with Von Bank finishing the drive. Neve’s extra point made it 34-0.  The Huskies would have the opportunity one last time to get on the board before the half, but Carter Reinbold wrapped up their return man fast, leaving the Huskies over 70 yards away from the endzone. That tough White Hawk defense just would not let up and forced a fumble with Matt Oko recovering. The Hawks were just 20 yards away from their end zone and would pounce on this last opportunity. Christensen would rush to within one yard and a jump ball thrown to Tyler Von Bank ended the half with the White Hawks on top 41-0.

The Huskies would start with the ball in the second half. Any adjustments they made at the half were matched by the White Hawks. While they started with the ball on about the 50, they could not find the endzone and were again forced to punt. The White Hawks would not gain much momentum this drive and were forced to punt. Jake Dallman showed how special teams are key to the White Hawks success by punting a 46 yard bomb that rolled and pushed the Huskies deep into their own territory. Yet again, the Huskies couldn’t string together much offense and were forced to punt. The White Hawks offense would use this opportunity for more game time for some of the younger players with freshman Cole Drill taking over at QB. After a quick set of downs the Hawks had to punt and almost as quickly, the Huskies would fumble with Cameron Oates recovering and Westonka would get the ball back with good field position. The fans got a glimpse into the depth and the future of their program as sophomore Jacob Hansberger and freshman Aaron Kroese showcased their rushing skills. Drill found Isaac Paul in the endzone adding on 6 more making it 47-0. The Huskies would try again but a huge sack for a loss by Isaac Paul pushed the Huskies back to 3rd and 17, forcing yet another punt. The White Hawks would get the ball one more time with over 5 minutes to go. The White Hawks played it safe, working their ground game and running out the clock. Final Score 47-0.

The White Hawks offensive ground game dominated, earning 119 total yards to the Huskies’ 77. In the air the Gaylord and Drill completed 13/19 for almost 200 yards, compared to the Huskies’ 41. Leading the Defense in tackles were Joe Zachow, Carter Reinbold, Tristan Oates, Jaaron Konkel and Jack Pfeiffer.

Special teams also had a solid night leaving the Huskies with tough field position all night. Special teams coaches Doug Runke and Jared Chapman shared, “Our early season emphasis on special teams and dedication to them has been paying off. Special Teams have helped us get an early advantage for two straight weeks, this week with a blocked punt. We have a lot of seniors that have experience on special teams and are showing up this year. Multiple kickers are able to do the job and are putting us in good position for our coverage.”

Senior captain Tyler Von Bank had a monster night scoring 26 points. He ran for 17 yards and had 119 yards receiving. When asked about the game Von Bank stated, “a lot of our success truly falls back on how well our offensive line is playing. They are opening up huge holes in our running game, and giving our quarterbacks a ton of time to throw.” 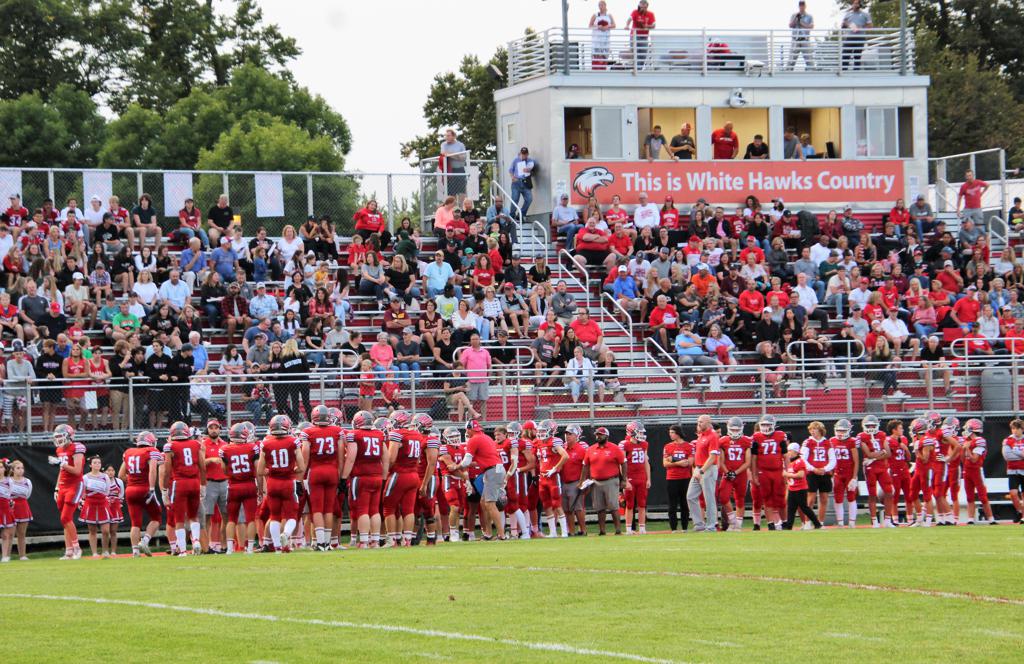 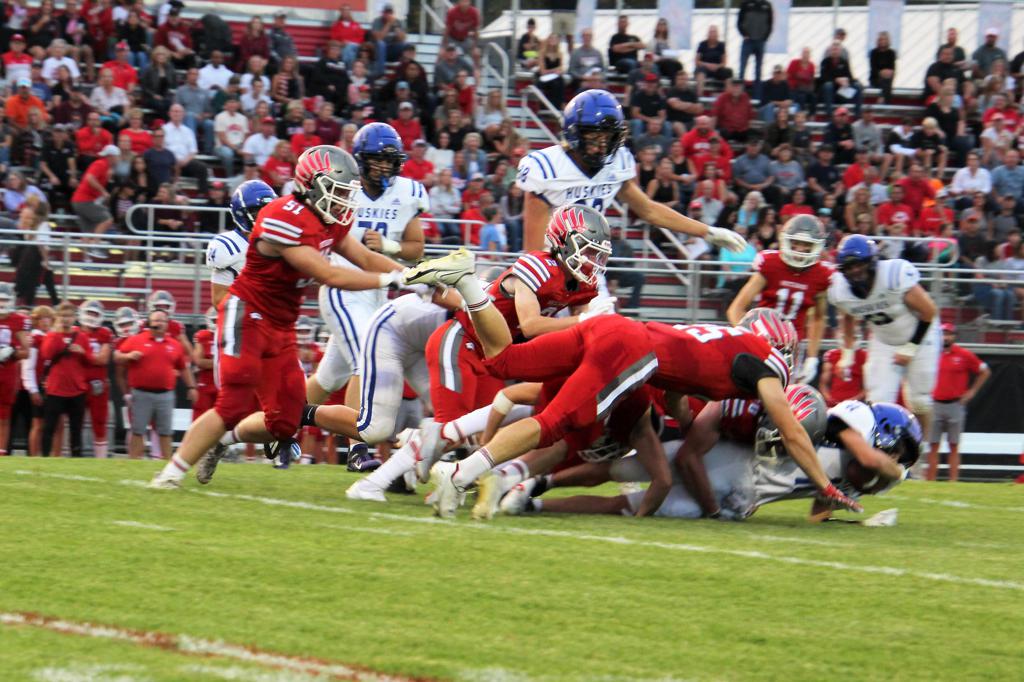 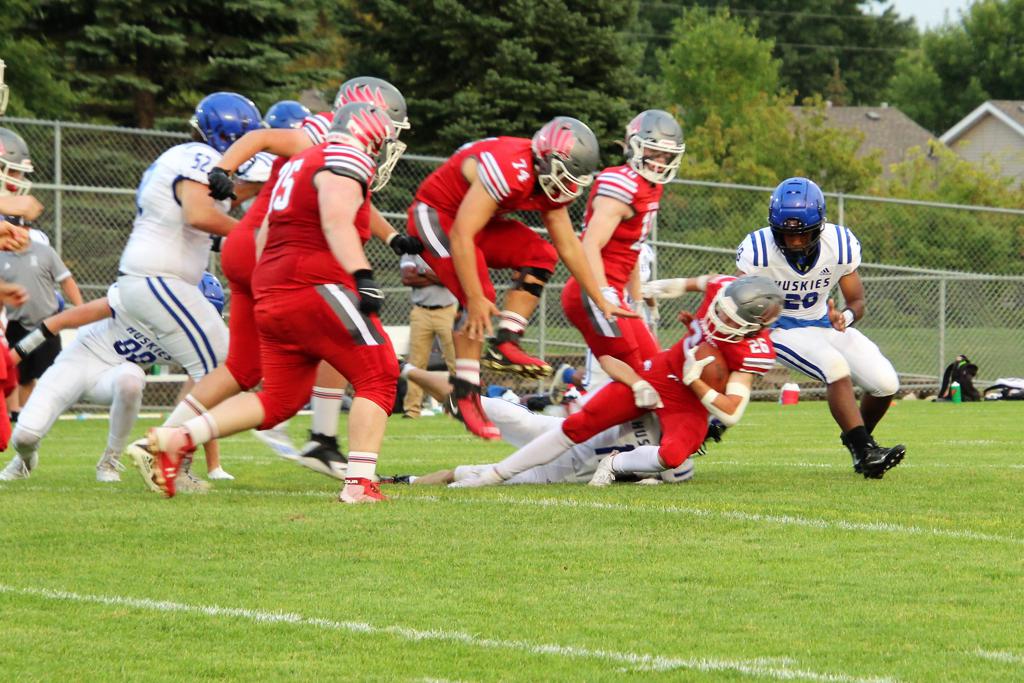