White Hawks Start the Season Off Right with 42-14 Win at North St. Paul

Even though schools are still grappling with a pandemic that just won’t seem to go away, high school football teams are in a very different place than a year ago. This year, COVID didn’t cancel a summer full of weights, camps, team-building and training. If anything, COVID cancellations of the recent past made these boys and their coaches even more hungry to play. Two-a-days in 90 degree weather? Bring it on! Rigorous off-season regimen? We’ll take it! For coaches that have been around, the consensus is that the boys looked forward to this season opener more than ever before. The White Hawks came ready to play and from kick-off on, they showed it.

In a start like no other, from the very first play the White Hawks set the tone for the game and the season to come. The first three plays of the game included a kick-off recovery by Joe Zachow, and QB Jake Gaylord drawing two off-sides penalties for 10 positive yards before even a second had ticked off the clock. When Gaylord took his first snap, the White Hawks were already deep in Polar territory. While the first drive did not lead to any points, the Polar’s could not convert either and their punt still left the White Hawks with good field position. This time, the Hawks would not be denied and thanks to some razzle-dazzle running by Cris Christensen, a reception by Will Wallace, a quarterback keeper by Tyler Von Bank and extra point by Ben Neve, the White Hawks went up by 7.

The Polars would receive, but once again, gained minimal yards thanks to the tough White Hawk defense. Resigned to another punt, the White Hawk defense took advantage of a bad snap and again found themselves with great field position. This set of downs became the Tyler Albert show as he turned plays that should have netted nothing, to something. He brought the Hawks to within 10 of the goal line. Von Bank stepped in for Gaylord to take the snap directly and again rushed to put 6 more on the board. A 2 point conversion to Will Wallace made the score 15-0 with under 2 minutes to play in the first quarter.

The Polars needed almost the entire first quarter to see their very first down of the game as the White Hawks defense was solid. While they put together a small rally, it yielded no points and the Polars turned the ball over on downs.

Quarter three was much the same. The Polars struggled to advance the ball against the White Hawks defense, while the White Hawks converted no fewer than two 4th down attempts thanks in part to Tyler Albert’s strong running and Jake Dallman receptions. Von Bank again found his way into the endzone and with Neve’s extra point the score became 21-0 with under 7 minutes left in the half.

The second half started much like the first with the Hawks picking up where they left off.  A 40+ yard return by Ben Tice, with extra yards tacked on for a late hit gave the White Hawks great field position. Gaylord again started the drive by drawing the Polar defense offsides on the very first two snaps. The White Hawk drive looked like it was not going anywhere after a series of incompletions, but on 4th down Gaylord found Jack Pfeiffer in the endzone and with Payton Kasper’s extra point, the lead grew to  28-0. The Polar offense could not respond and when Westonka took over this time, Carter Reinbold took the snap. At 4th and 16, Cris Christensen  rushed his way to a fresh set of downs and followed up with a rushing touchdown soon after.

As the 3rd quarter was winding down the Polar’s did manage a long completed pass but despite the momentum, went into the 4th quarter with a score of 42-0.

The 4th Quarter was a great opportunity for some of the younger White Hawks to get some experience at the varsity level. Cole Drill took a few snaps and Aaron Kroese, Ray Beiningen, and Jacob Hansberger saw positive rushing yards. Defense played strong and when the clock finally ticked down to zero, the final score was 42-14.

The White Hawks offense produced almost 300 total yards on offense, thanks in no small part to the offensive line of Anthony Kulisek, Sam Dioszeghy, Mikey Oftedahl, Marc Maas, and Ryan Butler making gaping holes for the ground game, and time for the air game.

Coach David said this about the first win of the season, “we were very pleased with the way that we came out and executed right from the get go. There are always some worries going into the first game of the season in regards to players being confident in their assignments, but the boys really played well, especially on special teams.”

The White Hawks will host the St. Anthony Village Huskies for their home opener this Friday, 9/10 at 7pm. 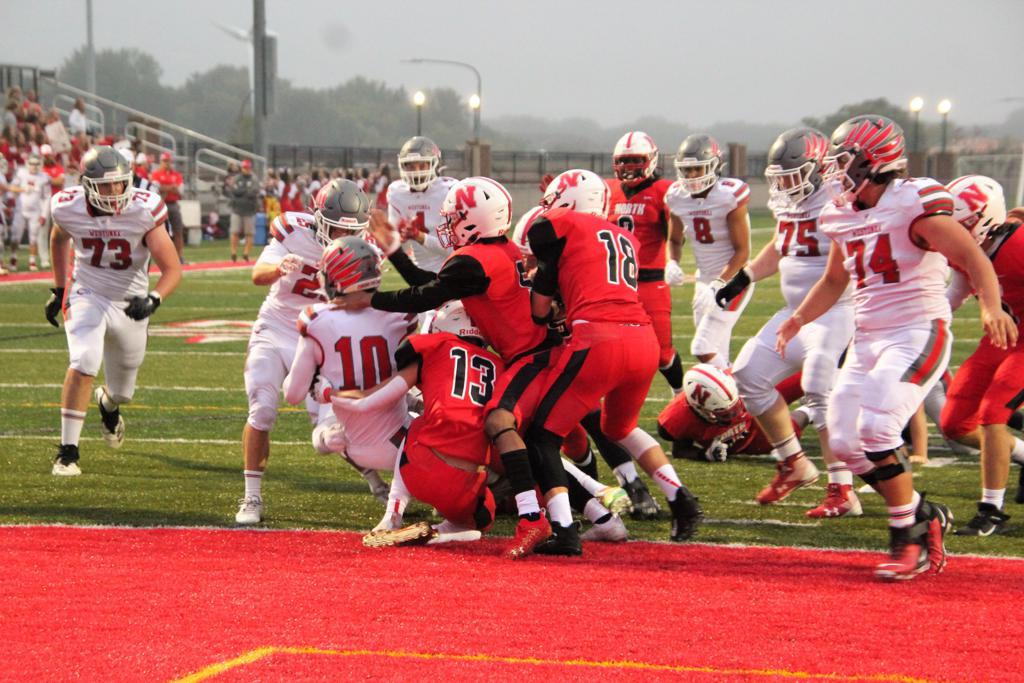 Tyler Von Bank scoring one of his three rushing touchdowns. 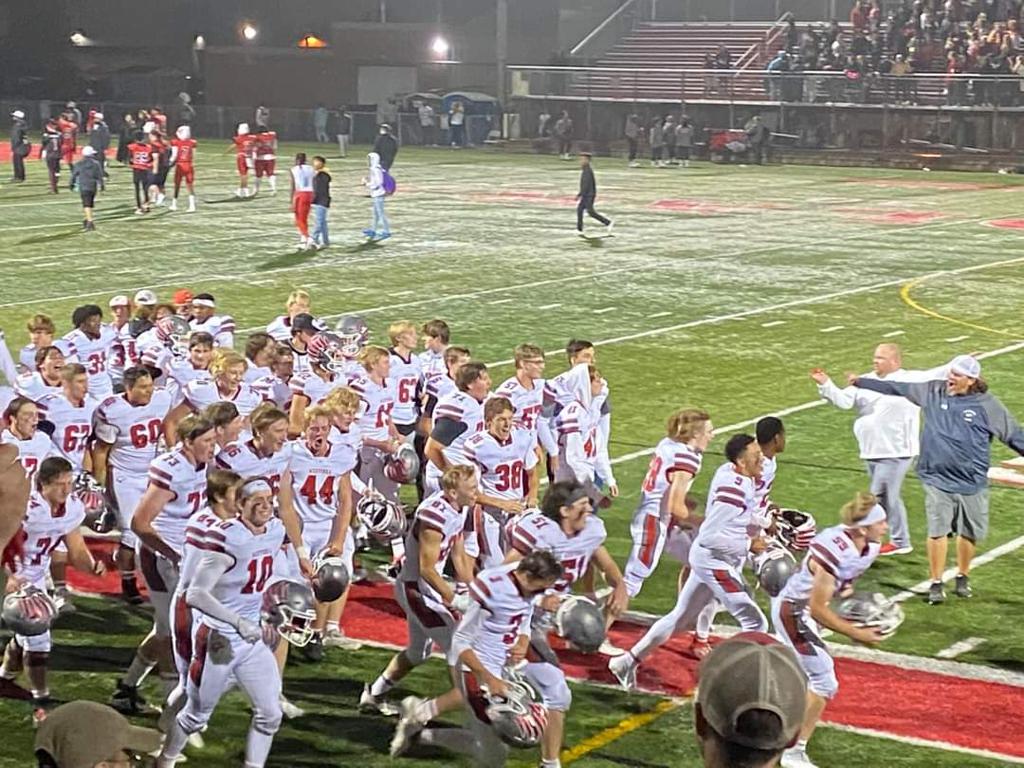 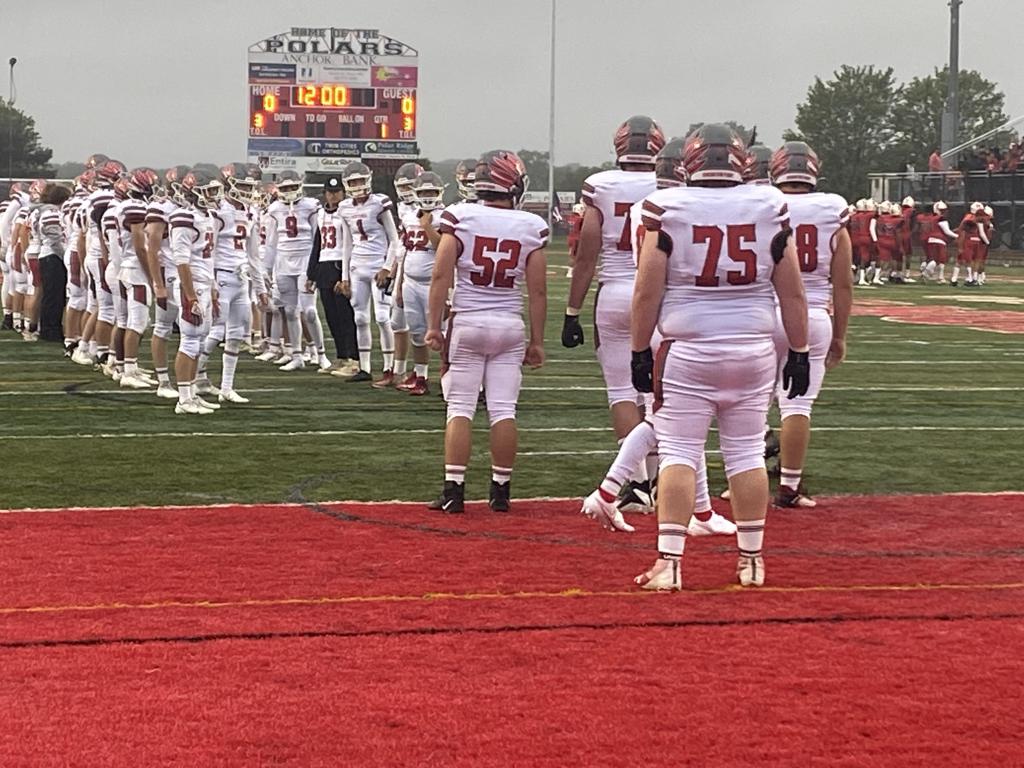